27 of my favorite things in one thing. This image is pure sex and the most pornographic thing I’ve seen ALL WEEK, cuddie.

Crates n’ crates n’ dresses n’ books bring me joy every day of the year, except for this particular day and the next few days that follow since I am moving. I am moving to a new apartment home in the city. I’m moving, again, just because I enjoy it so much. Soon there will be posts emerging from “apt. 680,” which I know, I knowwww doesn’t have the same catchy appeal as “apt. 15,” (Deck didn’t go to jail at the age of 680, sadly) but it’s a much better place, you guys! You’ll see. I’ll stand in my living room, probably holding a record and most definitely wearing something my mother would not approve of, take a picture of it, then post it. I know this girl with her own crib, in isolation, Keith said. That song’s about me. Sometimes I need to alter my surroundings. The background changes, but the overall themes of my life (bathing suits, ice cream, breaks, science stuff*, venom directed at bad/lazy rappers) never will. And yes, now I’ll be living up in the treez, but my heart’s still down at street level with all of you.

* The most powerful influence on women’s appreciation of their bodies is how they believe others view them, science says, to which I can only respond No fucking way/Yes, perhaps you have seen my blog.

Moving songs to give me energy while I drag crates and to, well, move me of course, include

1. V White and the Politician’s “Sixes on My Seven Deuce,” a song that’ll make you forget about the damage you’re doing to your car’s suspension with your heavy round chrome darlings. (Not to be too preachy. Sorry. They look tiiiiiight.)

Brilliant corners. The video was directed by Casual! 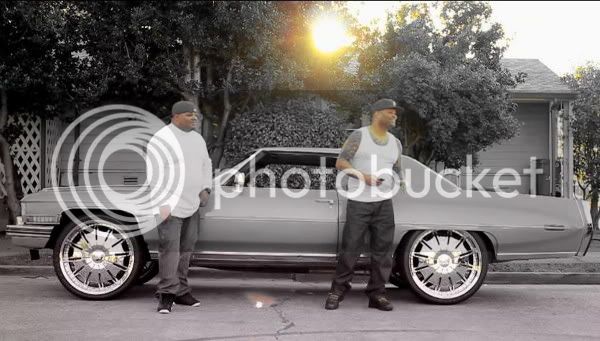 The sun is a-risin, most definitely. A new day is comin. (Ain’t it beautiful)

The beautiful bodies of ladies are fetishized in rap music/all music/America/HeightFiveSeven/the street when I walk down it. The bodies of cars: also fetishized. Players (the rims); players (the people) – fetishized (every gangster movie, every UGK song). The concept of things being “deeper than rap” (a statement which holds no meaning, it’s not real, since that’s like saying something is “deeper than everything” or “deeper than life,” which is to say that rap is a thing that can be quantified which of course it cannot). Of course that’s a fetish. Nearly everything I love is fetishized but I’ve mastered the ability to separate that from my enjoyment of those things. When I hit a relaxed mood and I’m just coasting on good feeling, I don’t mind so much that women and cars are usually described/beloved/criticized in the same way by straight men. I mean, who cares, because the beautiful paint-glisten in the pic up there resembles sweat, like that of a human female.

The Politician, whose heat is in the trunk along with that quad knock, also happens to have the face of Huey Newton on his tricep. (Black revolutionaries: also fetishized) I am listening to this song over and over, because that’s how my particular form of OCD (the flood of brain chemicals! fetishized) works.

2. I know nothing about these individuals other than a) fixies and b) drums. Warm-sounding drums. I don’t know if you’ll have the same love for it; I had to share, though.

(The greatness of an already-great song is slightly distorted, amplified, when I put on my precious expensive headphones. That’s the Sennheiser Effect. The sound is crystalline, booming and emotional. Hearty and fulfilling. My brain’s reward center needs it every few weeks – a song not about hookers and ki’s. This one’s like the musical version of steel-cut oats.)