Language and boys and whiskers on kittens; these are a few of my favorite things, to paraphrase Rodgers and Hammerstein. It’s usually just a lyric snippet that makes me yell with pleasure (“‘Race cars and weed jars’! CURREN$Y YOU ARE A SUCCINCT GENIUS”), but sometimes the menfolk amaze me with fully-formed sentences too. Since all I wanna do is hang out with Paul Mooney and talk shit or just sit there and listen to him talk shit, and then listen to T.I. read the phone book in his Bankhead lilt, but I can’t do either of those things, here’s some word joy from the Internet/my record collection/my brain that I’m swooning over:

1. “Zapp IV beneath the ashtray, woofers in the back
Water in the duals make loud glass packs.”

E-40 to start the list, obviously because he’s my personal John Keating but also because he teaches me things about worlds I am not a part of. I require this of all the men in my life. Water in the duals make loud glass pack is just gibberish to me; 40 might as well have said Cupcake zebra Pirellis on an airplane fold-down tray and I would feel frustrated, like oh shit, new coke slang I don’t know about yet. But then I found this. See, Curren$y, my dad, and UGK aren’t the only men I listen to when it comes to car engine stuff.

2. In response to a story on Gawker about an attractive and successful female getting caught up with a not-very-attractive and rather bitchy-looking young man from a wealthy family, and then that female winding up dead, a commenter makes his plea:

Switch the genders around and this paragraph still works. “Foxy gentlemen, date (lady) nerds! They are charming, old-fashioned, sex crazy and will treat you like gold.”

Alas, this is unlikely. Life’s not fair. Nerds don’t turn heads and everybody knows the head-turn is the first step toward getting involved in a love affair. Another good example of life not being fair is that that’s not my face on that shirt even though it clearly should be.

3. “He jumped out the Jeep like yo, what up chief
But I don’t eat pork, so I guess he wanted beef.”

D-Nice, “25 Ta Life.” Got started thinking about this song because: a) the deathless ubiquity of Vampire Weekend means that they are showing up on Best Of 2010 lists and this picture accompanied one such list:

b) Well would you look at this here, I said. I do believe I have seen a similar photo before that preceded it by about 20 years:

c) Thought about D-Nice and his jeep raps and scrap raps and culinary restriction raps and how great it is to hear what up, chief in a song. I don’t eat pork, so I guess he wanted beef. That’s really all it takes, you guys, for me to fall in lust, or at least really really strong like. Word-whore English majors for life.

4. Alec Sulkin, Family Guy writer, whose Twitter feed is a series of YES.

5. “I’m sitting in the house now that was built with the Wu-Tang money,” says Syl Johnson in the Voice. THE WU-TANG MONEY, he says, and then looks around at his granite countertops and crown moldings. Love Syl’s forthcoming ways and unashamed raking in of vocal-snippet payments. Everybody wanted Arab money a few years ago, remember? Now it’s Wu-Tang money, at least if you’re a beloved ’70s soulster. The real prize, though, is the pile of cash that the creator of all the Law & Orders is sitting on right at this moment. I need some of that Dick Wolf money, you guys.

“Different Strokes.” This UNNHHYYH! is only rivaled by the stupendous James Joseph Brown’s guttural explosions into microphones during the years 1967-73. Other than that, this is it, having been stretched and looped and lovingly manipulated by dudes from regions including but not limited to Compton and a certain NYC borough.

6. Andrew Kuo, NY Times maker of graphs and sometime DJ at the Cha Cha (but who isn’t in this goddamn city, really)

7. “Got a yellow bone bitch rollin’ weed, servin’ grits
You know curly head Amanda, ain’t she from Atlanta?
Condo on Peachtree, roommate named Pamela
In love with her body, girl don’t sweat them lil’ love handles
That’s where I put my hands at when I snatch you up to ram you.”

Chevys over Cadillacs. Body-confidence raps. Rust bucket; I spent fifteen huuuuunnid on that muhfucka. The Mac Dre reference (people from Louisiana listen to Mac Dre! I always thought he was a regional thing, but I’m happy his influence has spread–like how I freaked out when Paul Wall mentioned Nickatina). Ramming (sorry, Mom). Admiring the ass, I’ma smoke to that before I tell you get in the bed and arch your back (sorry, Mom). But most importantly: yellow bone girls, a group I proudly rep. I’m like a super super duuuper yellow bone. In summary, it’s still JET LIFE FOOL, and I’m still the #1 stewardess, as long stewardesses are employed by Pan Am circa ’72* or Pacific Southwest Airlines whatever year this was: 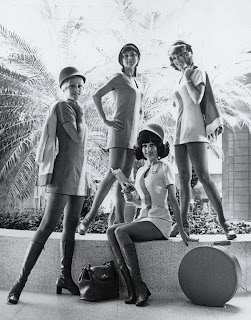 I also just found out about something called skullcap tincture, which helps with anxiety and is the plant equivalent of Curren$y’s voice. An anti-spasmodic, muscle relaxant, and pain killer, this substance will also provide inspiration when I name my next mixtape. Mannie Fresh x YellowBone Logan present: Skullcap Tincture.