– It’s risky to invite Chris Brown to your charity event no matter what, but more specifically, it’s risky to invite a whiny, blame-dodging batterer to do it real hard in the paint for charity just a couple years after you made a schmaltzy song about teenage girls getting battered. Explain yourself, Luda.

Chris is a free man, he has a right to be at events of his (PR people’s) choosing, and he did have to take some legal/financial/karmic punishment for what he did, but it’ll take me a while to forget The Incident and I have the right to keep bringing it up for as long as I want to. “Hop in the game knowing the risk,” the mighty Dante said once. The risk, in this case, is incurring the wrath of a nerdy blogger in her tiny Los Angeles apartment by daring to show up at a charity game with a goofy grin and some stylish no-look passes.

The event looked fun, though. And in some feel-good news, David Banner was there, and Nelly is still alive.

– DJ A-Trak doing one of the final performances at Fat Beats NY. A-Trak is ok, but he is just ok. He was the best option we had available? No Caz? 9th Wonder? BOBBITO? Maybe a Beat Junkie or two? Everyone else was out of town, apparently. A-Track was a risky choice because it brings Fat Beats’ management dangerously close to alienating its fan base. Luckily, the new fan base with its mp3s and childish computer games far out-influences and out-spends me and all my crotchety old friends.

– Using the word “motherfucker” after finding out its disgusting history is risky, because everyone might hate you. Yesterday Toure linked to a review of HBO’s Boardwalk Empire describing the origins of the word, and the entire Internet shook its fist in anger and said We’re never using that word again. My darling offended masses: before you knew its history, the fact that the word refers to someone fucking a mother was not enough to make it deplorable? We had to discover its connection to our history of slavery in order for everybody to pause? I’ll still use it (on the Internet, not in real life; I’m a lady) because I’ll need some more information before I believe its history as told by some producer of some TV show, and because nothing else comes close to the purity of the term motherfucker. So I will clutch it hard and won’t give it up easily. It is just so beautiful in its accuracy. Muhfuckaaa. Bulls-eye! Motherfucker. The thought of “Method Man” without it hurts me a little, right in my gut.

(The C-word is still never ever OK, though. I mean, it is, just not if you are ever hoping to see me without my top on.)

– Record companies putting out deceased rappers’ music is risky. Album sales aside, this usually has tragic results, soiling a good man’s legacy by flooding the market with every vocal snippet, every answering machine message left. I said usually, though. (RapRadar)

On the last episode of Mad Men, Peggy said, “I can’t tell the difference anymore between something that’s good and something that’s awful.” That about sums it up for me too, sweetie. But right now I’m leaning toward this being gooooood since I cannot stop playing it. My ears hardly ever make bad choices.

Big E makes another beat suitable for snapping your fingers to. Pimp C says shit like sheeeit. Something called Gator Mane ends his verse with the words “tabernacle, holy water” and it makes perfect sense. E-40 coins the term “yay-per trail.” Feels like I’m driving a ’73 Cutty when I hear this, even though it’s really a late-’90s Japanese compact. Yes. It is good.

– Black Mountain, “The Hair Song.” Risky: being a rootsy woodsy earthy Canadian band with catchy hooks and beards. This band already existed once, and it was called The Band. THEEEE BAND, motherfucker (!). The name says it all.

(I love Black Mountain, though. “Lucy Brown” was my walking-down-the-street theme song 2 summers ago!)

Also risky: me, trying in vain to join the rag-tag girl gang introduced at the beginning of the video, a group of ladies armed with their thrifted-leather-cross-body-bags and old Dolly Parton records as shields (that’s what they’re looking at in the record store–I recognize that album cover! My darling nerd brain, you never let me down). 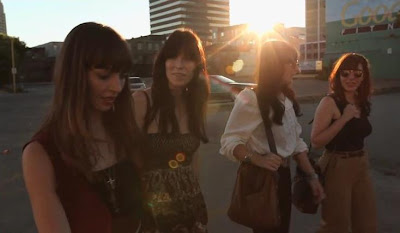 Becoming a member requires straight brown locks past the shoulders and a straight brown curtain of bangs. Girls with highlighted long unruly Celtic hair cannot make this look happen–some of us are cursed to look our best only with thick Farrah waves (please refer to the photo at the top of this post). I’d rather hang out with the boy, anyway–he almost landed that kickflip and he’s way prettier than any of the girls.

It’s risky to use a slice of country music to build your rap song around. It doesn’t translate well. The exceptions to this rule are Johnny Cash at the end of “The Magic Number,” Johnny Cash at the end of the Helloooo Brooklyn part in “B-Boy Bouillabaisse,” and the not-yet-made Swishahouse musical beast that you’ll play in your vehicle (is “slab” still the term, or do I need to update from ’05?) which will get its melodic backing from “Houston” by the Gatlin Brothers.

– Gibbs plus Auerbach, Bun B, Chuck Inglish for some reason, and Chip tha Ripper, “Oil Money.” Here we have Ohio, Indiana, Illinois, and Texas–representatives from the Big 10 and the Big 12–meeting somewhere other than a college football field/basketball court. Oh dear! Regional beefery could ensue! It’s a Big Risk (ha). But then you remember that all of these guys are making money, and you see Bun B with his Undefeated hat and big ass wedding ring and just overall foxy demeanor, and you can’t help but SWOON. Don Cheadle will star in the Gibbs biopic coming in a few years, mark my words.

(I can’t keep up with the changing standards for rap video girls–are the pale black-haired ladies on display here the new attractive? My own standard for female beauty was set by the “Next Episode” video–beautiful shiny skin, pole acrobatics, round body parts both real and fake, sequins, thighs, cherry-vanilla scented everything. Straight males, please advise as to whether this, below, is still the hottest thing in the world) 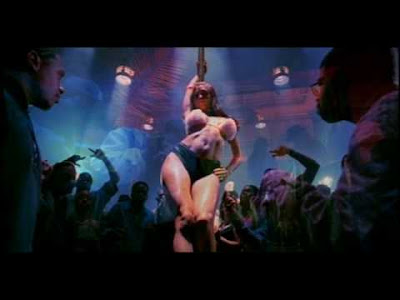