Now I’m in the limelight due to the fact that I rhyme tight, and also because of my vast knee-high/thigh-high sock collection. These pics are from that one day when Biggie informed my outfit choices, and I strutted around in my red-and-black lumberjack and my pixellated-Biggie-face slouchy tank top, and nobody dared fuck with me. WE DID IT, BROOKLYN.

The only things I know about fashion are

Bathing suits are nice,
it took me a long time to figure out that boys like skinny legs and go crazy when they are paired with short garments + heels; I wish I’d known sooner because I would’ve really capitalized on the shit instead of being awkward and self-conscious about my own terribly skinny legs,
Zac Posen has a mean case of bitchface,
florals will be huge this spring,
I would like a bag from the House of Wang with those DOPE GROMMETS on the bottom!,
and
there was this one time when K. West and crew went to Paris fashion week and just did not give a collective fuck about how they would be perceived by all the dudes in their old neighborhoods. Other than that, plaid is in for fall, and as someone who is partially made of hardy Scottish stock and who likes songs about red-and-black lumberjacks, I endorse this.

In other plaid news:

I miss this individual and his solid technique of verbal intercourse. And yes, my wistful memories and corresponding photograph are appropriate in this post because houndstooth is a form of plaid. Fall back, pattern police.

“Livin’ Astro.” When rap’s Sun Ra tones the weirdness down, he has a Chris Wallace sort of lyrical bent. This could be a Biggie verse, no?

I got my shades, big rock star compared to Elvis
Signin autographs for rappers, while girls move they pelvis
Write songs quickly, for Elton John or Lionel Richie
Call up my butler, get clothes washed by the maid
Ivory soap, this is clean, feel like Cascade
I count the bills, roll to Detroit in Sedan DeVilles
I throw my skully on, big robe like Marvin Gaye
Step in the front row, primetime I move your way
Budweiser Fest soundcheck, demanding more respect
I come correct through the Metro, and turn y’all petrol
I’m up here early bitin donuts sippin on espresso.

Isaac Hayes displays how stunting is, in fact, a habit.
That is all.

Just found out they fucking play Pavement at Urban Outfitters. Not counting the fun I had singing along in my head when I walked around, this was a bad experience. My stress level really suffers because of these kinds of daily intersections of commerce and musical purity. Who cares if the 15-year-old next to me is hearing Pavement on account of shopping in a store headed by a conservative capitalist entrepreneur? She’s 15, and it’s Pavement, and this means that the music will seep into her and inform all of her choices in life. She might not hear it otherwise, until years later when Natalie the roommate plays it for her during freshman year at UCSB. My mom says it’s bad for me, all this mental anguish. But she also says that my sassy mouth is the reason I’m unmarried, so what does she know. Look at Steve there, though. That’s a pretty nice haircut (har!). I love the purple v-neck, too. Fashion, baby.

This.
That is all. 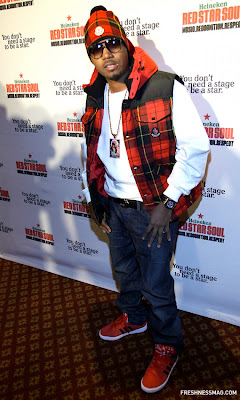 I’d rather die in a box than live safe in witness protection
Gotti was a racist, but he still get praises
We don’t give a fuck—gangster is gangster.

Abbey Lee Kershaw has that gap-toothed, tiny-facial-featured beauty that I will just never be able to master. It’s frustrating. Fashion loves skinny and white, and I’m both of those, but sadly, fashion does not care for hips and that’s why my modeling career peaked when I was 12, then plummeted and landed with a resounding thud. I have confidence that I could pull off something like the look in this photo, though, because I can master nakedness under a plaid button-up, I can master having an adorable bellybutton, and I sure as hell can master a bored expression in front of the camera. This picture is oddly sexy and I can’t understand why, although it’s that criterion that generally applies to anything sexy. My point is, just please, someone: manipulate an electronic image of me, and give me cartoon antlers. The Great Typo Hunt has been all over NPR, and the concept is kind of cute–these 2 guys who get little to no ass embarked on a journey to fix all egregious misuses of grammar in signs, ads, and articles. They then wrote a book about their, uh, adventures. I’m kind of like these guys, except with sloppy rap songwriting and production. I see it and I have to call it out; I’m on a mission from God. Maybe one day I’ll write a book about it, and then you’ll all be sorry you ever made fun of me.

Oh look, here’s our first example. That awful Game and his buddies Swizzy and Jay Elec (whose presence here confuses and upsets me) have made a song called “Higher,” which is bad and which flips and bounces Bob Marley’s “Iron Lion Zion” incorrectly. “I’m gonna be higher,” they believe the chorus goes–except somebody didn’t pay attention to the fact that the song is called “Iron Lion Zion,” and there is no mention of the word “higher” in there. It sounds like “higher” because Swizz, I guess, cannot understand Jamaican patois, but all he had to do was consult the title of the song he chopped up and looped. This is just lazy songwriting, and more proof that the best thing Swizz Beats ever did was play hypeman to DMX on Chappelle’s Show. That’s where he excelled.

Mike Watt is never not lumberjackin’, sartorially speaking. Always with the flannel button-ups, that one. But you know, you’re in San Pedro, you got the onshore flow, it’s overcast. Dress in layers. They did a piece about him in the LA Times over the weekend that was entertaining and delightful. His feelings about Iggy Pop and, more importantly, BASS, are summed up below. Watt will always be the same, even with creaky bones and gray hair, just like Adam Yauch.

“Iggy’s a great cat, as a music person, but he actually knows a lot about culture. He’s very intelligent. I’ve learned so much about being a better bass player from that guy. There’s these guys that don’t operate machines, they have different perspectives of the sound; they’re more like conductors, almost like a bridge to the people. So they can help you, especially with bass, because it’s kind of mysterious how bass works. It’s not just a guitar. It’s a weird thing, kinda like grout between the tiles.”

First of all, this is just an excellent photograph. It’s full of joy and movement. Who knew Jehovah’s Witnesses could swagger so convincingly.

Second, it’s MJ’s birthday. That’s why “Human Nature” was all over popular radio today, even though they should’ve been playing “The Way You Make Me Feel” (late-’80s MJ), “Say, Say, Say” (early-’80s-underrated-pop-duet-banger MJ), “You Haven’t Done Nothing”* (mid-’70s-backing-Stevie-Wonder-with-his-brothers MJ), or “I Wanna Be Where You Are,” from the heartbreakingly-innocent-face era of MJ. OH, or “It’s Great to be Here.”