The poison is bad for ya, stupid.

Aside from the ones that are so obvious we stop even noticing—Glenn Beck, Andy Breitbart, Shark Week, CNN, the design of all Trader Joe’s parking lots—there are many stupid things that surround us, and I need to call ’em out. When people exaggerate they use the adjective “countless”; there are countless stupid things in this world, one might say. I was able to quantify all the stupidity from last week, though, and then I placed my findings in a handy list for you.

– This news that Fat Beats is closing in NY and LA. What’s so stupid is not just the punch in rap history’s stomach here, but additionally: WHERE ELSE can I go to purchase Living Legends 12”s while dressed like a stripper librarian and being overly self-conscious with my heels clicking on the wooden floor? As is always the case in my times of stress and heartache, I only want a member or close ally of CoFlow to provide me with consolation; Mr. Len, thank God, stepped up. His eulogy is about 2 sentences long, but he deserves a break because he’s writing from a place of stress and heartache. And he manages to work in “Internet you crafty son of a bitch you win again,” a little ray of comic sunshine in an otherwise sad news story (Atlantic Monthly).

– Madlib x overpriced coffee, courtesy of Intelligentsia. No way in hell could Madlib ever be stupid, or say or do one stupid thing, so this gimmicky nonsense is clearly Chris Manak’s doing. Gimmicks are stupid, especially when they are tie-ins with crowded and sense-overloading coffee depots that frighten hip-blessed nerdy girls with social anxiety disorder. And OH THE IRONY, since Madlib has no need for stimulants of the caffeinated sort–he is holed up in his bunker most of the time with his 12″s and subsides only on Nitrogen atoms from the sky above and acai extract that he got from a shaman atop Corcovado.

PS, Monchie’s been telling his bros about Madlib because Monchie, I guess, thinks that his bros haven’t heard of Madlib? It appears that Monchie believes it is currently 1996. (I do too, though, so it’s ok. The Score is a great CD! Can’t wait for the Fugees‘ next 3 or 4 albums).

Asked about the appeal of the look to the opposite sex, Mr. Hunter said, “It just gets a dirty idea in your head. Like, ‘This girl is wild,’ or it’s just very sexual, like, ‘Let’s degrade this person.’”

– Mark Hunter, on the appeal of the “dirty girl” look to the opposite sex

– “Dirty Girls.” The NY Observer’s story on them is about 4 years too late (they interviewed the Cobrasnake), but the siren call of the unwashed ladymuse does not appear to be waning in its power. The quote above is outrageously stupid, but I approve of the trend because it expands the definition of female beauty–physical imperfections show up in V mag and we realize they are lovely, not unlike ourselves and our own numerous imperfections. It’s like the Rawss phenomenon among suburban kids—you listen to him and you’re like Hey! I could do that! Makes you feel pretty good. It’s too bad we need imperfections to show up in V in order to realize our own imperfections are lovely, and it’s too bad that you’re only allowed to pull off this look if you are a thin girl and a white girl, but that’s a topic too vast and wide for me to cover here. I’d like to point you in the direction of a Naomi Wolf or bell hooks essay, thank you.

– Fabulous’ “Body Count”? So stupid! These “dead people” of which he speaks are former US presidents and statesmen whose faces adorn the currency in his pocket. This is a cute concept, and I’m surprised nobody thought of it before (go Brooklyn!) The stupid part (aside from his monotonous voice and complete lack of microphone-related charisma) is the line where he describes unworthy adversaries as such: The competition is a skinny bitch: no body. This is not so much “Loso, you’re stupid” as it is “Loso, you hurt my feelings”; as a skinny bitch with hips and a soft pillowy bosom like pow, I am particularly qualified to point out that there are outliers among us bony featherweight types. Even if we account for the fact that 98% of us who are skinny do lack body, we should remember that lacking body is not a bad thing according to a thousand Tumblrs. Fabolous clearly has not seen those photoblogs in which underweight white ladies are presented as silent, topless, bird-like creatures that you are supposed to want to make vigorous love to. Worship her until her beautiful smooth-skinned shell cracks and she transfers her magical life elixir into your breath and bloodstream. Then give her a sandwich and encourage her to stop smoking, ’cause it’s just not ladylike. Also, Loso, failing to mention of Ice-T even once in a song called “Body Count” is stupid.

– Lawsuits. They are not stupid on their own, but when formerly virile New York MCs are the plaintiffs in lawsuits, they quickly turn into sad and stupid exercises. I’m referring here to Method Man suing vast quantities of something called “Juggalos” and/or their representatives.

Many moons ago, before the Clan got torn asunder on account of death and bickering, Meth was the biggest and the toughest, a real ladykiller with that charisma and sense of humor. Dudes had a crush on him, too. But years of record industry foolishness has apparently taken its toll, for now he is a bitter old man who does not realize how foolish he looks, nor the comedy gold inherent in a chubby 19-year-old in Iowa being able to brag to his boys, “Method Man sued me!” The least possible G thing you can do is sue somebody, followed closely by “make up a criminal past just to see if people believe you” and “hustle for followerz.” Lawsuits are for cranky old men and celebrities afraid of being called gay. The hardheaded never learn. Stop actin stupid, Mef. 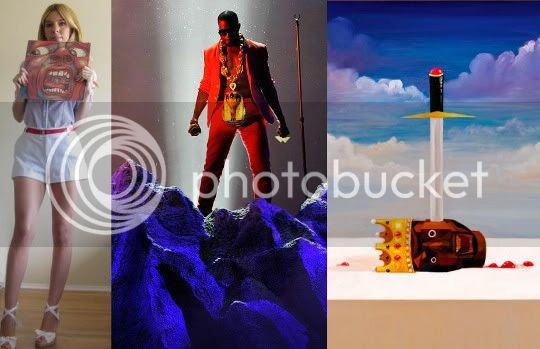 (there I am on the left, pretending to make out with Robert Fripp. OMG, look at my prepster chic ensemble and new espadrilles! Cuuuuuute.)

– The “Power” remix is stupid. No, not Swizz’s ridiculous and pointless part where they just let him yammer on for a while, loudly shouting annoying hypeman platitudes to Kanye from the booth—although that part is really stupid. What I’m referring to is Kayne Omari rapping about sex, in the least-convincing collection of rhymes since Rawss talked about kilos and work and gunplay. Aw Jesus. It’s so stupid because WE DON’T BELIEVE YOU, SIR. Nobody thinks you actually return home from the club with something to poke on! (sorry Mom). Murakami and Jeremy Scott raps are where you excel and nobody can take that away from you. Let’s stick with what we know. I don’t think that’s actually you on Twitter, neither, but that intern does a mean impression of you.

These delicious and dreamy Miu Miu stripper-librarian oxblood ankle-strap 5-inch penny loafer platforms are called Amarena colored in the store (amarenas are Italian cherries). In apt. 15, I prance around in ‘em and feel so smug that they match my ox blood Porsche, which of course match my rims–and those, in turn, remind me of blood hitting his Timbs. Still, my intellect will win out, I’m afraid. Paying September’s rent is smart; buying a pair of shoes that are equivalent to September’s rent is stupid. I’m too fiscally responsible to buy these at full price so the prance-around-the-apartment scene will remain a fantasy. But I have exceedingly good breeding and knowledge of social graces, so I’ll curtsy and say “Thank you, kind sir” if/when you present them to me. Then I’ll put ‘em on so I can keep it sleazy while in the stacks, returning books to their proper home according to the Dewey Decimal System.

Wally-esque bootie heels! Successfully unifying stupid with amazing, these are necessary for Pepper Potts role-play dress-up time as part of my sexual repertoire. I need to impress my boyfriend with the feminized version of the Clarks classic. I can get ’em in any color you want, but it’d be like blue and cream, if you really, in fact, know what I am saying.

– Everyone please calm down about that tragic Biebs/Rae/Kanye thing that appears to be actually happening, maybe; you’re being stupid. (I’m posting this from my bunker with my Living Legends 12”s where I’m writing letters in blood to Daniel Dumile, begging him to impregnate me so that something good and pure and real will emerge out of my body and remind me that there’s still beauty in this cold, dead world. And yet, it’s you all that I’m telling to calm down. Heh. Stupid.)

Ha! Thanks for indulging me. I’m being stupid.

– Raekwon’s Gold Superfantastic Edish of OB4CL2 has a Travis Barker remix on it, and that’s stupid. Mr. Barker has some kind of odd stranglehold over the rap collab and remix world, and I really feel out of it, like I missed the boat entirely. I’m lost. Crawling back into my bunker soon. But at least there’s no Biebs on the album, and at least it’s more Rae being released into the universe, and at least there’s this song, which turned me into a weed smoker after years of remaining abstinent, even though I went to college at UC Santa Cruz! It’s called “Rockstars,” featuring GZA, the production work of GZA’s cousin, and Inspectah Deck doing a dopeish Bun B impression, and I need to know from whence that guitar snippet came, before it got chopped n’ looped n’ caressed into this.

Mac Dre – “Get Stupid.” It was either this or any one of E-40’s songs–but I feel like this site already heartily supports E-40’s songs. The women like me—I’m dipped in butter/I’ll rob your brother, pimp the blood out your mother. This is where the definition of “stupid” suddenly changes. “Stupid” is now “great” and “knocking,” because this song is fucking stupid. I mean, really really dumb. Nearly retarded.
mp3.

2 thoughts on “Stupid: variations on a theme”