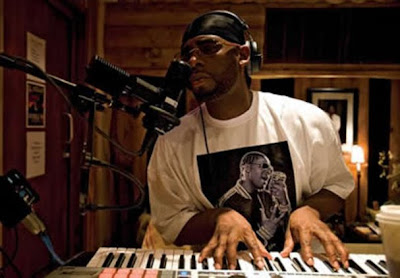 1. People, remove your underpants and gather round ’cause KELLS IS WRITING A MEMOIR.

Robert’s bout to take his key and stick it in the ignition of the literary world! The book is reportedly to be published by SmileyBooks, Tavis Smiley’s unfortunately- and boringly-named publishing company. Snippets from the advance copy below.

Interspersed throughout, bodily fluids like what, bad metaphors for lovemaking, and denials of latent homosexual tendencies.

I believe that this book is premature, as there is so much more love to be made. So, so much more! No matter; I’m celebrating its impending arrival. It’s a good thing R. Kelly’s sex life is completely my business since I never ever tire of hearing about R. Kelly’s sex life which obviously makes R. Kelly the Tiger Woods of postmodern R&B.

Pretty close to what we dream of as the perfect pop song, circa ’03. The only offensive things about its video are: a) Nick Cannon as the DJ, and b) the large amounts of Celtics jersey for someone who CLAIMS to be a Bulls fan. Dear boys of the world, I will never understand how colorways and style can trump allegiance to one’s local sports squad. You’re too worried about your outfit and not worried enough about division standings. Also, you could stand to care a tiny bit more about me and the things I need and how I like to be held.

2. The exotic and colorful beast known as “Virginia hiphop” was brought into your living room this week by a nerd on World News Tonight.

The offensive thing about this is that it’s done by one Ian Cohen whose whole style, carriage, attempt to out-nerd me, and inefficiency with the English language completely fucking annoy me instead of it being done by a lanky-limbed, socially awkward, and appropriately-shaped female type with good manners and a master’s degree. Media, you’re sexist. Internet, you too. Get this, I have breasts, and guess what, they don’t get in the way of me being able to articulate my feelings about the brothers Thornton in front of a camera in a studio. Girls can do it too. Call me for a gig like this next time. And stop staring at my rack.

Now I sit back and wait for the inevitable email from Ian, since I just know he’s the type to Google himself.

3. Let’s all watch Howard Zinn’s The People Speak on the History Channel, k?

The offensive thing here is that there’s a Matt Damon appearance; however, there’s also a shot of the Brooklyn scene used for one of the Things Fall Apart covers*. Howard, you’ve out-hip-hop-ed me again! AGAIN.

Dear Howard, I hope this finds you well. I’ve had it bad for you for years now. If things don’t work out between me and Larry David, Rick Rubin, Paul Barman, Nick Kroll, or Rahm Emanuel, please allow me to be your shiksa plaything. I hear Ambien sex is crazy; let’s see what all the fuss is about, shall we?