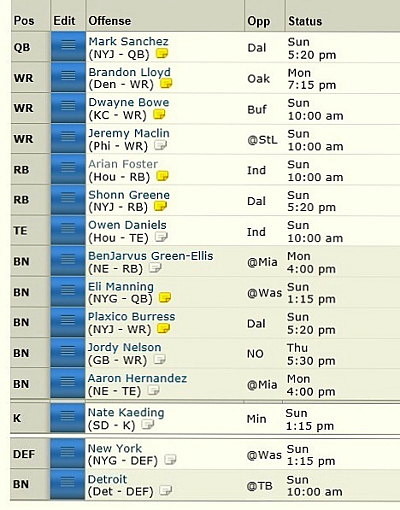 Why yes, Hank Williams, jr. – I am ready for some football. SQUAD UP:

QB: Mark Sanchez, NY Jets
Pros: USC! Not Matt Leinart! Had pretty good numbers last season, and will maybe keep improving? Maybe? I’m also told that “with a few lucky bounces he could have a good (year),” which applies to me as well as every other human being in the universe.
Con: He’s from Mission Viejo, and people from Orange County cannot be trusted. People from East Orange, however, can always be trusted (to provide the world with at least 1 life-is-wonderful heartrate-increasing soundtrack banger).
Team’s best rap nods:  Aw, pumpkin! I’m so glad you asked!
• “JETLIFEJETLIFEJETLIFEJETLIFE, jet set/nothing less, jets fool, EAH, where haven’t we been, lames catch feelings/we catch flights, jet life/it sucks to be you…” (fade out). • “New York City respects my game like Mark Sanchez Joe Namath” – Monch. A quick Internet search also tells me that Bad Meets Evil has an actual Mark Sanchez line; however, I find all those songs so boring and therefore offensive to my ear canal that I cannot verify this information.

Backup QB, although who knows, I might start him: Eli Manning, NY Giants
Pros: 4,000 passing yards last year! Also, with Steve Smith gone, Eli will have the firm-yet-flexible hands of Hakeem Nicks, even more ready and willing to catch for him. teehee.
Cons: • 4,000 25 interceptions last year! • Just super goofy looking. At least he commits to it, though – Eli’s not changing his style for anybody, which makes him the Danny “50 didn’t like my pants” Brown of my fantasy team • Personality boring like peanut butter & jelly on Wonder bread, Kanye’s women issues, an Ikea couch, grown men Twit-scrapping, Jay Elec’s voice. (I let these gentlemen into my heart and psyche every fall; a little charisma would be nice.)
Team’s best rap nod: • “I slam tracks like quarterback sacks from LT” – Deck. (Reference circa 1981-9, but it still counts) 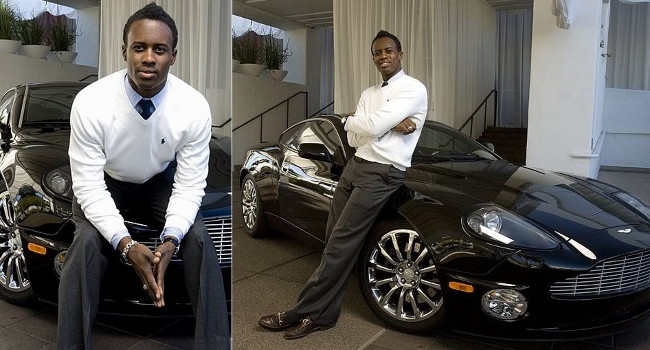 Team’s best rap nod(s): • In a few sex raps over the years, there have been mentions of individuals “throwing” the “P” or the “D” “like Elway” (you’ll have to figure it out, as I am a lady and I CAN’T TYPE THOSE WORDS, teehee! Hi Mom!) • “Ice cubes in my pocket; too many drive Elway style. I got this.” – Curren$y. • “I keep it real dirty, dirty, you know how I do/Purple and gold with the Lakers, the Broncos – the orange and blue” – “Air Force Ones” (click, grin, chair dance. 2002 pop radio magic.) • I have it on good authority that Denver is just like Compton.

WR: Dwayne Bowe, KC Chiefs
Pros: • Pro Bowl-er • Spells his first name correctly. Every time he’s in Miami and sees D.Wade, Bowe’s like What’s up DwYYYYane, hahahaha. I like that. (Seems like Wade needs to be taken down a notch ego-wise, I’m just saying.)
Con: I’m an IRL Raider fan, and I fear that my IRL hatred of the Chiefs will result in me self-sabotaging when it comes to fantasy, purposely putting Bowe in some no-win situations. Why do I do the things that I do? What’s going on in this head of mine? More complex than an almanac, that’s me.
Team’s best rap nod: “Watching the Chiefs blow ’em out/In between Arrowhead and Suave House, no doubt” – Andre Rison (ha) on an Eightball song. I should call this “team’s only rap nod, outside of ‘Queen’s Gambit’ (too easy), something by Tech N9ne (nope), or a fucking Mac Miller song (which I refuse to post on here, for ethical reasons).” And because the mourning of Jerry Lieber continues in apt. 680, “Kansas City” is appropriate for the listening in this case too. It’s not-rap but it’s got bass and movement, and that makes it perfect for the chopping and looping. I have daydreams of its future appearance as a rap break; won’t somebody please use it?
Quotable: “This one girl was talking to me like she’d known me for years. ‘Hey, D-Bowe, how’s Grandma?’ I’m like, ‘How do you know my grandma?’” – on ladies who are big, big NFL fans.

Pro: NO CANCER! Fuck outta here, death!
Cons: • Mysterious vomiting and night sweats not due to cancer or any other ailment; this man appears to be a bit of a delicate flower. • Maclin’s teammates must call him “J Mac,” yes? Sigh. Of course they do. And I’m sure he’s fine with it. Points deducted for lack of creativity and overall predictability.
Team’s rap nod(s): • Well, Wayne’s from Eagle Street of course. “My city is New Orleans/Baby, my street is Eagle.” • Tons of McNabb and Vick mentions – “Stay running the rock just like I play quarterback for the Eagles – Randall, Donovan, to Michael” – Gibbs.

Pros: • Built like PlasticMan (6’5″, 232!!) like all receivers should be. • Possibly has a Dwayne-Carter-esque just-out-the-pen hunger which would result in some prolific output.  Cons: Will maybe have a Prodigy-esque just-out-the-pen hunger to overcompensate out of desperation which would result in some underwhelming performances (aw Prod. Sorry, buddy).
Rap nod(s): Oh Jesus Christ, too many. So many. (Game n’ Weezers)

Pros: “EHH” during the regular season, but “OOH” in the playoffs. Showed some fancy footwork in the Super Bowl too.
Con: I find it difficult to respect a grown man named “Jordy.” I might be able to reconcile this as the season progresses if he performs well…however:

in a shocking turn of events, it’s possible that ownership could go with Chicago’s Johnny Knox as a Possible Backup WR instead! He might get lost in the shuffle on a team that has Roy Williams and Devin Hester, but at least his name’s not Jordy. It’s an odd and powerful feeling, being a woman in LA with no team-ownership experience who suddenly finds herself able to put these guys in or take them out in a giant game of Fate, Destiny, and Met/Unmet Expectations. This must be what it’s like to be Jerry Jones! Or RZA and GZA on the giant Clock of Life, taking breaks to play chess.

Team’s best rap nods (NO, not that Wayne song about being a cheesehead): • “With a knapsack of green Supreme hats/Like I was sponsored up by the fucking Packers” – Ty. • “My belt got G’s on it like a Packers helmet” – not-Nicki and not-Wayne so who cares, “Pass the Dutch.”

RB: YAYYY I GOT ARIAN FOSTER ON MY SQUAD, TOP OF THE WORLD, MA!, Houston Texans

Pros: He’s from a place called Sicklerville, so how could he not be a sick fucking overachiever on the field? (Logic’s not my strong suit. Hips are.) Plus Tomlinson’s getting old, so Greene will be able to shine like sunlight, like gold, like my wit and charm.
Connnnns: Obvious mom and dad issues, since they decided to spell his name that way. I see this manifesting itself as some distractedness on the field.

Backup RB: BenJarvus Green-Ellis, New England Patriots
Pros: • 13 touchdown carries last season! • Nickname: “The Law Firm.” LOVE IT.
Cons: The epic name “BenJarvus” carries no weight, no special meaning. It’s not a family name or anything! – his mom just liked it. I can respect that, Mrs. Green, but it’s still disappointing.
Team’s best rap nod(s): Does this count? (It’s my blog, so it counts):

TE: Owen Daniels, Texans
Pros: • When healthy, he’s good. When healthy (this hasn’t happened since ’08, though that season he did have over 800 yards). • This stupid league makes me play a tight end every week instead of a fourth receiver (which would make me much happier), but Daniels is one of the best available.
Cons: See below.

Quotable: “That shuttle launch was pretty sweet.” He also enjoys reruns of Rob and Big, going to the gym, and staying positive – all important parts of his training regimen for the 2011 Boring-Personality-Off between himself and Eli Manning.

Backup TE: Aaron Hernandez, Patriots
Pros: • Decent numbers last year, and he’s so young that I believe he’ll only improve from this point. • Handles it like a grown man (“I’ll get better”) when random dudes criticize him electronically. This type of maturity and non-bitchery is so unusual in the world as I know it; feels like dreamland.
Con: Fantasy football sites have informed me that, due to the Patriots having another good tight end in Rob Gronkowski, Aaron’s stats will suffer “because the ball is spread around so much.” TEE HEE.
Team’s best rap nod, since, OK fine, “Patriotism” was kind of cheating: “I got the bomb; call me Tom Brady” – Ghosty, in that horrendous Rae song that makes me yell HOWWW does Khalil keep getting production jobs? Is it blackmail? He must have overtly homosexual photos of Dre or something. (And for the record, Ghost: I’m not going to call you anything but “sir,” “god,” “darling,” “dear,” “darling dear,” “Ironman,” “king,” or “Tony.” xoxo.)

Pros: Can consistently and adeptly use his foot to make a football sail through the air and land square between two goal posts. (I get this guy almost every year in fantasy. He’s solid if unspectacular, much like his rap equivalent…umm, Elzhi? Skyzoo? Royce? I don’t know. Somebody help me here.)
Cons: Has the unfortunate appearance of a weakling. Is Nate anemic? He just looks super feeble; I kind of feel like I could black his eye out even though I have arms like Mr. Burns’.

Team’s best rap nod: “I might charge through San Diego with the bolts on my shoulder/Rock the Trailblazer warm-up, ’cause Portland gets colder” – Fabolous. Nice to hear a song from Loso about menswear rather than yet another one about ladies’ shoes and purses. 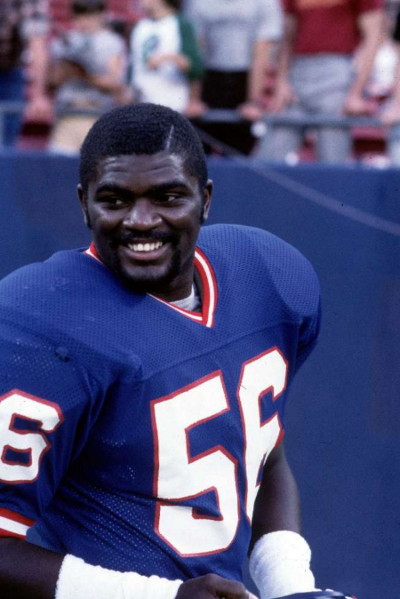 DEF: NY Giants
Pros: Lawrence “I breaks it down to the bone gristle” Taylor has a fondness for powdery stimulants and sex professionals, but nobody can dispute his skill as a player. His competitive spirit still permeates the Giants’ defensive line to this day (in my head), though he hasn’t played since the ’90s. As far as the current roster goes, all I feel the need to say is PRINCE AMUKAMARA. Nigerians are good at everything.

Backup DEF: Detroit Lions
Pros: Other than Ndamukong Suh, I’m not sure. But Baltimore, Green Bay, Pittsburgh, Philly, and Chicago are all taken – what am I supposed to do, other than back this defense with love, affection, and a few prayers to the NFL gods on Saturday night before I lay my head down and go to sleep?
Team’s best rap nods: • “Looking like Barry Sanders/So Icey flex game” – Waka.  • “A city full of Tommy Hearns thumpers/Grant Hill hoopers, Barry Sanders runners, stunners” – Royce. At first I was mad at various other Michigan rappers (ahem, GUILTY S.) for not mentioning their home team in verse, but then I realized that the Lions were terrrrrrrible during most of those guys’ young-man-hood. You’re forgiven, gentlemen. • “Like chocolate candy you will break/Running back, Detroit Lions, with an ill fake” – Keith, in Ultramag’s “Super Spellbound.”

2 thoughts on “Let the inappropriate emotional attachment to my fantasy football team begin!”