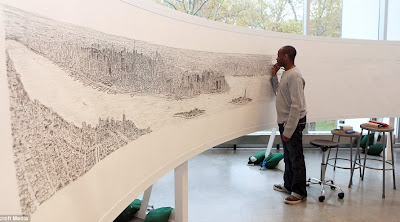 “This astonishing 18ft drawing of the NYC skyline was created by autistic artist Stephen Wiltshire after he spent just 20 minutes in a helicopter gazing at the panorama.

The unbelievably intricate picture was drawn from Stephen’s memory, with details of every building sketched in to scale.”

Here, again (pay attention this time, please): The unbelievably intricate picture was drawn from Stephen’s memory, with details of every building sketched in. To scale. From memory. The memories in his head guided his hand in drawing the skyline. Which he memorized. To scale.

Meanwhile, yesterday I paid my electric bill, did half a crossword puzzle, and then, to really show off, I found out what the lyrics of Carolina Carol Bela are in English with the help of my good buddy Google Translate. BOOM. I’m schemin not dreamin, people. 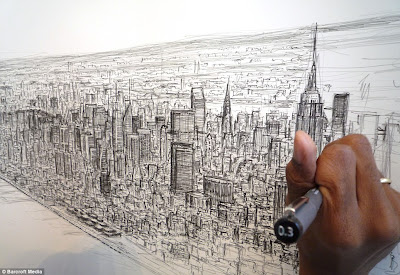 Diagnosed with autism at an early age, Stephen’s talent for drawing emerged as a way of expressing himself. He has amazed and astounded already with his sketches of Tokyo, Rome and Hong Kong, and most recently tackled the skyline of NYC, as he feels it’s his “spiritual home.” Aw, Stephen. I’m sure you’ve heard this and you’re in love with it like I am!

His sketches which can take a week to finish; Stephen works methodically, in short bursts, and uses up to 12 graphic pens as he commits his photographic memory to paper. He also draws heavily from music, which he carries everywhere in the form of his iPod. (Oh, what! It’s just like me when I’m folding laundry – I listen to Float to keep myself going and remain inspired when I start to get fatigued.) 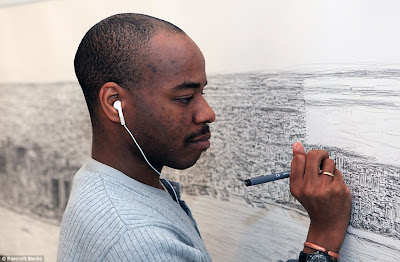 Stephen listens to his iPod as he sketches the famous skyline. He draws heavily on music from the ’70s to the ’90s. (me too me too, Stephen!) 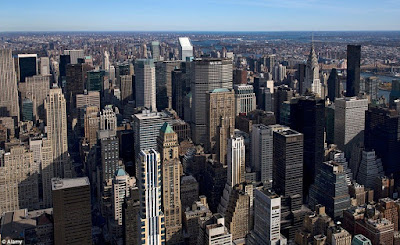 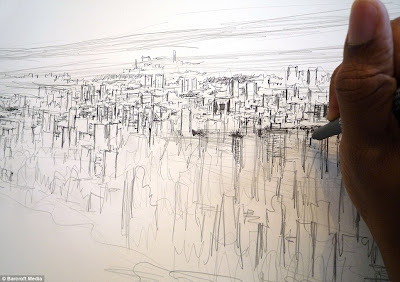 ‘Stephen sketches his layout in pencil first and then scales it within the border, first adding in landmarks before filling out in more intricate detail,’ said Iliana Taliotis, who works with Stephen and his family.

Video here in which everybody in the UK calls what he does “drawwrrings” and Stephen sweetly participates in numerous on-camera interviews despite social interaction being exceedingly difficult for him. He’d rather be waving from such great heights. Also, prepare yourself: upon viewing, you will want to hug Stephen and bring him home to live with you and make him tea and make sure he has clean clothes to wear every day. Guaranteed.

One thought on “Half man, half amazing.”