KEN-DRICK!
Here we go, a little emotion on a Sunday morning flowing through my girly brain, courtesy of RapRadar posting this video of Kendrick Lamar’s show last night at the Music Box. Ken’s komrade Game showed up for R.E.D. album promo  moral support of course, and proceeded to konvince me that he’s a pretty nice guy – which is basically a big manipulation tactic by Game to make me forget about his musical output and that time he seared my eyes with his “acting.” But I’m relaxed. I’m just going with it. It’s Sunday and I’m not religious but I do pray for peace, no traffic accidents, lots of ice cream, some freaking tight lyrics – and also for things that remind me of how lovely humanity can be sometimes. On with it, then –

Top 5 emotional girly moments in the video, Cuz! (my set affiliations will likely fluctuate throughout this post, and anyway it doesn’t matter because at this point green is the most important color in all our lives, yes?):

1. THAT SUIT. So much hash-tag-ery occurring in the building on Saturday night, of course, but also so many Hundreds shirts, I’m sure of it! SO MANY. And yet look at KL in his nice black jeans and sport coat, dressed as if he’s going to a completely different function than everyone else. “It’s Saturday night, you’ll probably wear that shit to church,” AMG said one time to a young lady in the club. Ken’s show was Friday night, plus he seems like a super clean dude who doesn’t wear things more than once, I mean he really keeps it tight and right, so he’ll probably wear that outfit just for this show alone. Then tomorrow he’ll have it cleaned and nicely pressed. Looking good, sir. And I know I keep saying it but Kendrick Lamar is just a really fresh name. You should run for President with that name, young man.
2. REMINDERS FROM JAYCEON. I know where I live, both because I have an adequate grasp of geography and because I listen to Power 106 for a good 70% of my driving time and that means constant “west coast/Cali/LA” drops are flooding the inside of my Civic, however: Game saying THIS IS THE MOTHERFUCKIN WEST COAST in that nice rasp of his (sorry; I’m a girl, remember?) and continuing with I hate when they say that the west coast ain’t poppin just feels good to a young lady from the greater LA metropolitan area. I know my mom loves me but it’s still nice to hear it from her. I know I’m a nice person but it’s still nice to hear it from my buddies. On a very similar note: OH MY GOODNESS, GAME! YAY! This IS the west coast! I exclaim. Oh Game, I hate it when they say the west coast ain’t poppin too! We agree about some things and that is nice! I like some of your songs even though my blog would tell you otherwise!
(tomorrow morning I’ll wake up and be embarrassed I wrote those last 2 things. I like the Scoop DeVille stuff, and I like that “Red Nation” but, I must be honest with myself, that’s more because of the Eazy snippet and because of Cool & Dre’s dexterity with shuffle-y drum programming than because of anything Game said or did in any of those songs. Ah well.)
3. I LOVE YOUS FROM JAYCEON. “I love you,” Game says to Kendrick, with his arm around him in that way that men do – affectionate but still keeping the body in a guarded position should a scrap occur even though you know a scrap’s not going to occur, it’s just that men have to make it look that way because of the limits put on them by our culture when they want to express emotion. “Dre, I love you. Snoop, I love you. Jay Rock, Scoop, Kurupt, Roscoe, King Tee, Pooh, Eiht, Tyson Chandler, Venus and Serena. Even if you’re from Lynwood or Willowbrook, I love you. Skinny-lady blogs, I love you most of all. Apartment 680, Echo Park, birds in the sky, old records, the NFL about to start, cookies, ice cream, puppies. Logan, I love you. I love you – all of you.” Aww! Hold me! It’s promo, all promo, but it’s still heartwarming – like when Game volunteered at the animal shelter last week and provided updates about it, remember? “Sparky is a lab mix and has the nicest big brown eyes. ALL ANIMALS deserve good homes! ADOPT!  #REDAlbum.”

4. PUNS FROM JAYCEON. “One thing me and (Ken) got in COMPTON…” Teehee. 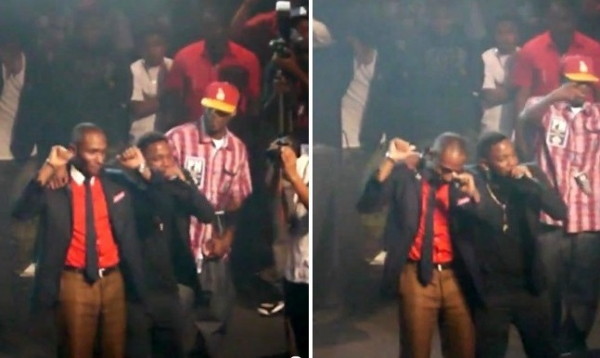 5. SPECIAL APPEARANCE BY DANTE, WHAT IN THE FUCK. Kendrick’s a little too preachy at times, dropping some important historical names in verse without any real gravity behind it, criticizing his generation for sippin cough syrup like it’s water, blah blah, but he just turned 24 so that’s forgivable. (I was a realll pretentious piece of work at that age.) “Who gives a fuck?” Ken also says, “We never do listen unless it comes with an 808.” Not sure if I’m included in the “we” but just for argument’s sake, let’s say I am – and Kendrick, my dear, what’s your point? 808 taught me everything I need to know about car stereos and sex. But holy Christ, fucking hell, Mos Def is at his show in a sharp red button-up and shiny shoes, oh I just realized Mos is the only other dude in the place going to the same fancy function as Ken, I mean they’re in those matching sport coats, and people, my affection for these two men in this moment trumps all. (This is the video’s second-greatest moment – almost as aww-inducing as the crowd chanting Ken’s name at the beginning, but not quite).
Bonus emotion: The part in the video right after it cuts out, when Ken tosses it to Kurupt and he does a version of “Ohh!” that makes everyone in the audience rip their hair out and scream, it’s so incredible they can’t believe it’s actually happening.
Bonus bonus emotion (not really emotion, though – just a funny thing that fits in here): Nobody is apparently down-er than the Los Angeles Almanac, the website on which this map of Compton appears. CITY IN RED BELOW, SOO WOOOO, etc. etc.