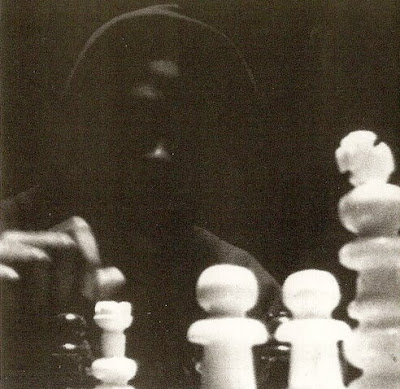 Somebody at Slate read my mind and wanted to know why those kooky Slavs are so darn good at chess. More than half of the Top 20 players in the world come from Russia or another former Soviet Republic. Why, though? First of all, good question, Slate – and one that I’ve thought about but was too lazy to research. Thanks for doing all the legwork. Second of all, Saint Petersburg must be in Staten Isle. Clearly. Also, the etymology of the word chess excites me in a special way that I’m certain all my fellow lady English majors understand.

CHESS:
“13c., from O.Fr. esches, pl. of eschec (related to ‘check’), from the key move of the game. The original word for ‘chess’ is Skt. chaturanga, ‘four members of an army’ – elephants, horses, chariots, foot soldiers.” (OED) 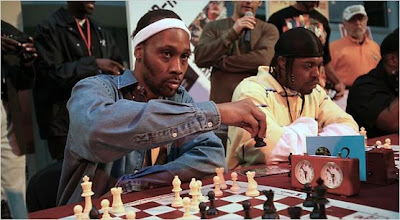 Pictured on the left: the seven in the center of the eight-pointed sun.
Also, isn’t it weird neither RZA nor GZA had verses on Chessboxin? I mean, the 2 chess fanatics? What happened there? OH CLAN, your eternal mysteries captivate me.

Anyway, Russia has been so adept at chess over the years because the Soviets subsidized the game. Chess evolved from a much older Indian game and came to Russia through trade routes in Persia and India; it’s been popular in Russia for generations and became a national pastime in the early 1900s after the Bolsheviks took power (leftists love mind-fuckery, even in board games). The commander of the Soviet army under Lenin started state-sponsored chess, opening chess schools, hosting tournaments, and promoting the game as a vehicle for international dominance. They then, um, dominated. Internationally. Russians won lots of international chess titles over lots of years. So that was a pretty good plan.

The Soviets also saw chess as embodying their revolutionary ideals and intellectual talents that they held in high regard. Plus it was cheap, anyone could play it regardless of class, and to Soviet leaders, “its back-and-forth dynamic reflected the dialectical concept of history espoused by Marxism.” Related to this crazy idea of people working together to get their needs met (??), the Russians developed a reputation for collective thinking when it came to the game. Players were sometimes told set aside personal victory, to lose on purpose in tournaments, in order to allow better players to advance. In 1972, at a match between Bobby Fischer and Boris Spassky, dozens of Soviet grandmasters huddled during breaks and debated what Spassky’s next action should be, which of course makes me think of Family Feud. Or a swordfight, where you must think first, before you move. Fischer, by contrast, only brought one assistant. (Because he was a jerk and a show-off. Go Americuh. PS, he went crazy. Holocaust-denying, paranoid crazy. Chess will fuck you up. Somebody keep an eye on RZA.)

And after all this, not one Grandmasters mention?? Slate, please see me after class.

Yes – “I’ve Seen All Good People.” Because it is epic, it is pretty, it is melodic, it is about chess, and it contains John Anderson’s ’70s vocal fierceness. Just too fantastic. And because I think I’ve reached my Wu tipping point this week (!) so I decided to go with some classic Dad-record-collection music. And because it contains the eternally true lyric-as-life instruction Don’t surround yourself with yourself. I mean it. Don’t.

And just for fun, here we have a new clip of Rizzies in a denim suit talking in that way he talks, with that voice he has and that accent he has (why thank you, Crate Kings). The topic at hand is how much Prince Paul rules the fucking planet. In case you forgot.