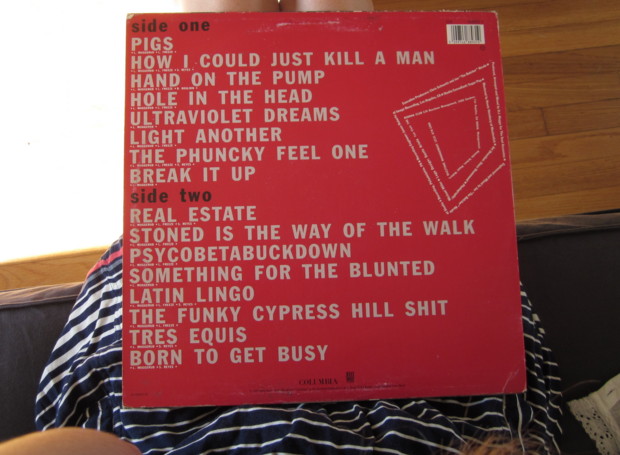 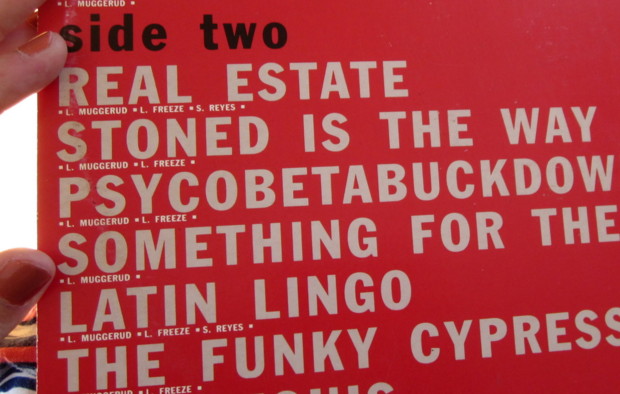 1. I will never not say it: Intelligent Hoodlum is a waaaaay better name than Tragedy Khadafi.

2. The simplicity, functionality and aesthetic appeal of those Source ads from ’91 still hold up in ’11.

Was it album art director Stacy Drummond who was responsible? If so: madam, excellent work. 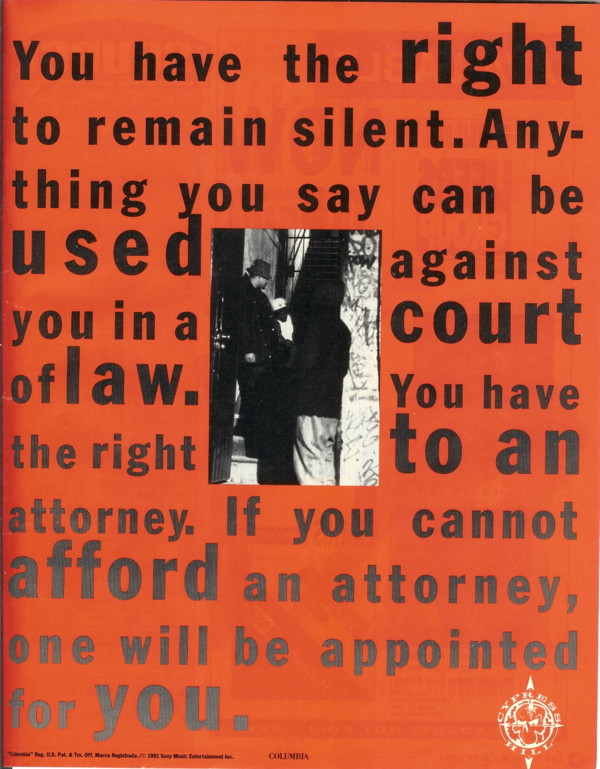 Ms. Valentine taught me about the concept of “Chekhov’s gun” in 12-grade English – a literary technique in which an entity is introduced early in a story, but its significance does not become clear until later. Muggs says they recorded this album in the winter of 1990-1. In March ’91, a video came out featuring the LAPD behaving like complete fucking murderous heathens. Ho-hum. Aaaaanyway, track 1 is called “Pigs,” it is about law enforcement officers, and in it – just like in nearly every song that follows it on the album – the boys make brutality (shooting, prison rape) sound fun and sing-song-y. There are all these well-placed la-la-laaaas in the album’s stories about putting holes in human flesh, which is terrifying yet charismatic and amusing, like Jack Torrance or every character Joe Pesci plays.

3. Muggs tells Brian Coleman that PE and Ultramag were his favorites and the ones that influenced him most of all.

First of all, ME TOO, LAWRENCE MUGGERUD, even though I don’t make beats (yet); second, NO FUCKING WAY, LAWRENCE. What I mean is: yes, upon listening to your compositions, one might be able to infer that you were influenced by the brothers Shocklee and that perhaps every night during the Cypress Hill crafting sessions you slept with one hand on your crate of most breaks-rich funk records. This influence also explains the New York-y feel to the group, which was probably Columbia’s doing on some A&R bs – plus it was the Giants over the Bills in the ’91 Super Bowl – but the fact remains I have a big problem with the videos being shot in NYC (even though ’91 Q-Tip is always nice to see – the presence of Ice Cube in the video doesn’t make it all ok, though! You’re just throwing LA a bone with that one, gentlemen). PS, Larry: I’m not mad that to make “Something for the Blunted” you basically just let “Future Shock” play and laid some cheeba cuts on top. (Ask me about my feelings regarding Kanye and “Otis” sometime, and you’ll understand how much of a compliment that is.) I’d also like to give you a special shout for using that “Tramp” bassline, which provides the whole foundation for the song, and for sampling THREE James Brown records on that same song. THREE. Swoon.

People don’t put that creepy stop-motion walking-backwards craze in their videos anymore. I miss it.

Other things people no longer do: call dudes busters or marks; do the lift-up-the-knee stomp-dance;
wear bucket hats (other than DZA; he’s the only one these days).

4. That “Phuncky Feel One” breakdown vs. the source of that breakdown (the JB’s, “More Peas”): which is superior? This remains a heated debate in apt. 680.

“Phuncky” is a can of ginseng extract with a pinch of coke. I mean it’s just pure energy. A party in a bottle, 2 in the morning, still jumpin ’cause your mama ain’t home. But then you got the JB’s! It’s THE JB’s! How can I deny them? There’s the break at 08:28, takes my breath away, and just before that, James, as usual, chops it up with the song. He asks the song how it’s doing, you know – makes suggestions for where the song should go, talks about the geographic areas where the people playing the song are from (Georgia; not DC). “We gave the people some. Can we give the bass some? Bass, you ain’t had none. When we give the bass some, let’s take it to F…Can we take it to F?” UM FUCK YES MR. BROWN, AND OH DEAR, WHAT’S THIS, MY DRESS APPEARS TO HAVE FALLEN OFF OF MY BODY.

5. In 1990, there was no such thing as Death Row Records and, just as tragic with regard to my personal life story, no such thing as Starbucks in Los Angeles. Things were different then, that’s all I’m saying, and the world was rather inadequate.

So of course you and your boys are gonna want to make some music. There was nothing else to do. LA was dullsville. “Back in ’94 I shoulda signed to Death Row,” today’s Power 106 driving-around-in-the-Civic banger said to me. Ooh what a song, I thought to myself after that first verse/hook combo. Then I thought: Oh dear, all the mentions of firearms and ki’s and ass; Banner would hate this even though he raps about those things too then he hides behind his master’s degree. And then: No, Money Jay–back in nine-one you shoulda signed to Death Row. You want to be ahead of the curve, my friend. Ah well. I still have great fondness for the song, though in concept more than execution. Dudes are so braggy all the time in my ear canal that it’s nice to hear some humility and remorse for bad decision-making every once in a while.

6. This is Cypress Avenue in South Gate, where the shit used to go down for our heroic trio – or at least where they would play football in the street until their families called them in for dinner. 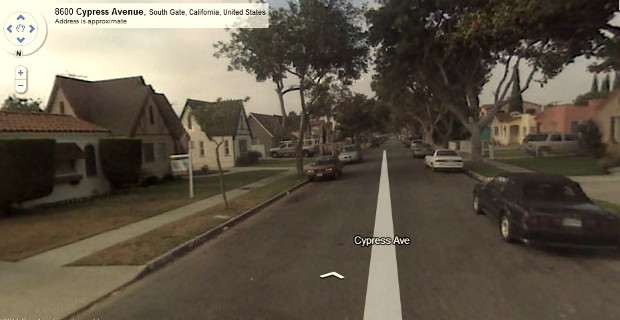 Does it look familiar? It should, because it could also pass for Andre Young’s childhood street, or Pooh’s or King Tee’s or, I don’t know, Arabian Prince’s? Hell, it looks like Oxnard too – the street upon which Michael and Otis Jackson jr. played. The grassy, pretty, tree-lined-ness of LA neighborhood aesthetics lends itself perfectly to making songs when you are a young man, because it’s boring, and there’s little else to do. And my ears/heart/body thank the good lord for that.

John Tesh’s epic/corny ass composes the music; it’s playing in my head as I write this. Do-do dododoDOdo-dooooo (that’s how it goes). I knew this fact before I composed this post, because I have a massive nerd brain inside the head that sits atop my skinny-lady frame. What I didn’t know is that this was also the year the flagrant foul was introduced. I’m not sure how all this dovetails with the recording sessions for Cypress Hill (winter ’90-1, remember), but it seems important-? And then, 20 years later, Lil B does a song about his chain looking like John Tesh and girls doing things to him with their mouths because he looks like John Tesh, and in his spare time he introduces the term Mary Hart for a groupie. J/K. Lil B has no idea who John Tesh is.

1. How do you know where I’m at when you haven’t been where I’ve been? Understand where I’m coming from. This is just skilled writing – specific and universal, like all great sentences.
2. Time for some action, just a fraction of friction/I got the clearance to run the interference. What does this mean/I love it/I’ve loved it from the first time I heard it.
3. ALL I WANTED WAS A PEPSI. Muggs, I see you. You got alllllll those Parliament and Bar-Kays records on your shelf, plus one precious copy of Suicidal Tendencies hidden in the back.
4. Actin kinda loco, I’m just another local/Kid from the street gettin paid for my vocal. Please see #1 (this one’s not so universal, although it kind of is, because in the greater LA area, everyone’s got label connects and/or a deal pending).
5. The hummin/comin at ya, how it’s always going away then popping back up in the song, is something like perfection only that sounds trite so I won’t say it. You can just tell Muggs puts his time in, though – he really fucking cares about the stuff he puts out. I will say that.

Honorable mention: putos. The way they just spit it out, so full of venom.

I guess back when he and CH were ‘90s buddies and used to…Ruffhouse together? (No? Teehee?…Groan. Sorry.) However, I know for a fact that “Time 4 Sum Aksion” was crafted by the hands of the basketball gods themselves, with care and love, for the purpose of having every high school team between the years 1992 and ’95 use the song as its warm-up music. And in a comical note, Wikipedia has a collection of “popular culture” instances in which the song appeared—a list of the 259 boxers/wrestlers/MMA dudes who have used the song as their intro theme. Not on the list: me, even though this song is my “getting fucking psyched to conquer the hordes at the DMV” motivation. Let’s get ready to ruuumbllllllllle. Mr. Sermon also used it in “Cummin Atcha” from that same time period (I get it, Erick – you liked the first Cypress Hill album); that song’s only remarkable for the liggedy-let the nines clap line, which reminds me that it was the height of the 9mm era, and I guess one could argue that we’re still in that era, but honestly for the last 10-12 years in lyrics the mighty Desert Eagle has stolen the show.

10. That “Duke of Earl” sample makes no sense within the lyrical context of “Hand on the Pump,” but this is forgivable.

I knowwww I can’t afforrrrrd to stop is what comes into my mind, first thing, when I think of a break that’s appropriate to the thematic and lyrical elements of an MC’s story. On the opposite end of the appropriateness scale, Squeeze her, don’t tease her, never leave her, while beauuuuutifully chopped up and placed in between J and K’s stanzas, is a terribly irrelevant and dumb Otis snippet to use in a song about having lunch with Charles Schwab or whatever the fuck those two are yammering on about. If I may, J and K: I would suggest an Otis song about having dreams to remember, or the We don’t want nothing but joy, y’all/Nothing but joy from “Cigarettes and Coffee,” in a song about jets and cash and being able to dodge charges in the American legal system just like Dominique Strauss-Kahn. You’re welcome, J and K! Really, J and K, it was nothing. But I would like a co-producer credit, please.

So the use of this particular break makes no sense, but Duke duke duke, duke of just sounds really fresh in a rap song about hunters v. hunted and being fucked v. being the one doing the fucking; nothing less than that, but nothing more, either. I guess to justify its use, you could say the narrators are establishing their royal status within their social system – Sen and B are dukes, figuratively speaking? Really, though, it’s just a sample that LA guys raised on K-Earth and Art Laboe wanted to use, so they found a place for it on the album. Why I can forgive inappropriateness when Muggs does it but I cannot when Kanye does will go down as one of apt. 680’s eternal mysteries – right up there with “how come some teenage boy actors can grow up and become fine, fine rappers (Mos) and others make me want to kill myself (Drake).”

One thought on “How did I not know that Glen E. Friedman produced that Suicidal Tendencies album?, and other things related to Cypress Hill turning 20 today.”