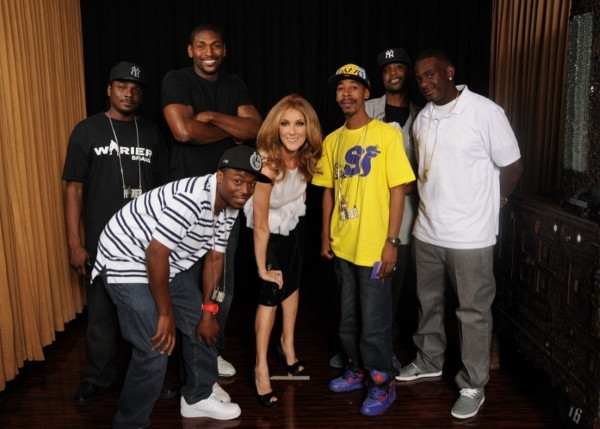 1. Ron’s 6’7″ so Celine is apparently 6’4″? 6’5″? She needs to bend forward like that to fit in the frame? Celine is a very skinny shrill-voiced Canadian GIANT. Unreal. (Ohmygod/why don’t I check Ron’s Twitter feed more often)

“How’d you come up with the concept for ‘Sleepin’ On My Couch’?” “Uh, it’s about people sleepin on my couch, Dre.” Del is probably a difficult interview, though, so I shouldn’t be too hard on
Dre. Anyway, Baby Del and his WOOLY DOME and his complaints about people coming to his home and not wanting to step are not real. It’s seduction; not a real thing. I am not familiar with this man’s work but from the strength of his speaking voice I feel like he might make a great MC and beat artisan (but only on his days off from reading me the phone book out loud).

I just discovered that first album was recorded here, in what is now a sad little AT&T store. 20 years later, here’s me, a girl on planet Earth, typing this post on a laptop I purchased in a store across the street from that location. The Boogiemen used to make coffee runs at that very Starbucks, which first came to LA 20 years ago. Mindfucks aren’t real. They’re just not.

5. “Dyslexie, a Typeface Designed to Help Dyslexics Read.” This is real, and it feels good.

A man reads the Koran on the first day of Ramadan while taking shelter from rain on a sidewalk in Lahore August 2. (Mohsin Raza/Reuters); The Big Picture.

I don’t get You’re beautiful emails; I get Nice blog, nerd emails. That’s the way I planned it and that’s the way I likes it; I know my visitors come to read my Fripp dorkouts, my Gibbs dorkouts, my ramblings about that moment when I realized K.R.I.T. means King Remembered In Time (pretentious, but I still like him). My visitors don’t even notice or care that I have hips (right??) because the pleasures of language overpower any romantic feelings between us. My visitors eat words up. I do too. And I take it for granted that I can do it so easily. So I’m taking a break from complaining about rappers, both because I’m still exhausted from yelling about WTT and because it’s not good for my psyche to be so focused on the negative, to do a little fawning over a typeface designer who’s doing some good for the world. 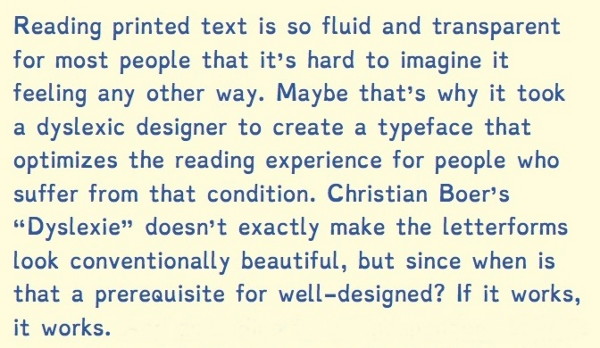 Boer compares Dyslexie (example above) to a wheelchair. He has dyslexia, and “followed his own instincts about optimizing typography to fit his own eye, then recruited eight other dyslexics (whom he didn’t know) to help him iterate through four rounds of design to refine the letterforms…” One of the key features of Dyslexie is the extra visual ‘weight’ it adds to the bottom halves of the letters.” Boer says this is to help “pin the letters to the baseline, which helps make them easier to read.”

The time he spent perfecting the thing is the best, most fawn-worthy part of his story. “I can tell you that I have worked on the comma for four hours,” he says, “and the letter ‘a’ for more than 12 hours.” Nice work, Christian, but does it make Watch the Throne any more tolerable? (FastCoDesign)

You gotta let me read just a page of you, baby. Frank Ocean – “Bedtime Story.” Frank’s got car-sing-along Power 106 Chris-Brown-levels beautiful pop melodies, minus the no-holds-barred bitchery and absolute hatred of women that Chris tries to make us all forget about when he flashes his perfect white teeth. Plus Frank’s got some musical blood running through him, being Billy Ocean’s son and all. J/K! Shabaam Sahdeeq and Raphael Saadiq are cousins, though. (J/K! Stop believing it just because of my trustworthy face!)