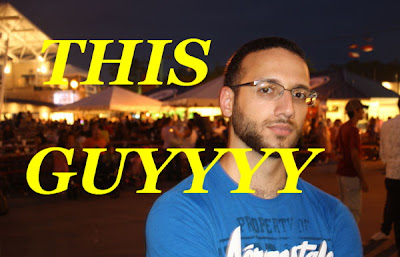 You don’t know this guy, but you kiiiinda know this guy. You know his work. And if I have done my job appropriately as a leftist girlnerd broadcasting from apt. 302, soon you’ll join me in harboring hot, coursing THIS GUY frustration due to his actions as described below. This guy’s a 20 year old University of Illinois student named Firas Alkhateeb. One fateful night not so long ago, he was doing some PhotoShop-ish tinkering on his computer, “Joker”-ized President Dreamboat’s handsome face on the cover of Time, put it on his Flickr page, and was done with it. 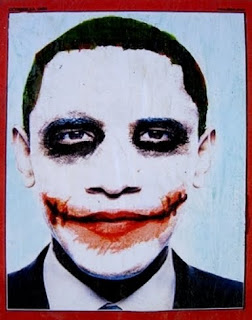 Except, HOLLLLD UP and/or wait a minute.

Then here’s what happened. Somebody else took the picture from the Flickr page (without mentioning this to Alkhateeb), slapped “socialism” underneath it, and put it all over your city and my city to make an unoriginal statement about Obama being our very own Hugo Chavez, only better-looking and in a Hartmarx suit. AAHAHAHA. See, it’s funny, ’cause Obama’s a Socialist! Just like…uh…the Joker as played by Heath Ledger and brought to you by Warner Bros? OHWAIT. See, that doesn’t make one goddamn bit of sense. Also, it’s the opposite of funny and is most definitely not fresh or irreverent in its message. Also, the Joker was not a Socialist. Also, everyone having access to health care in the richest country on Earth is not Socialism. And this isn’t Gotham. So stop it.

(I have entertained the thought that the person behind the posters could be some wiseass dude with a CalArts degree who’s actually pro-Obama and is trying to give us all a big postmodern headache by forcing us to talk about the characterization of political figures as public creations, assigned meaning by members of the culture and then figuratively passed around like action figures. However, the fact is that the work depicts Obama looking simultaneously scary and foolish, and that in itself is a statement about the man despite any ironic interpretations.)

So again, my man Firas Alkhateeb, 20 years old, in college, just playing around with some software, created the “Joker” image innocently enough. The “socialism” addition came later, thanks to some unidentified person – so it’s not Alkhateeb’s editorial about the President you see in these posters. Somebody came in and adjusted his original picture a bit in an effort to express some political leanings. Lovely; I disagree with the message in this case but I support the concept. And what’s also lovely is that Alkhateeb himself supports the concept; your dude does not seem concerned at all with getting paid even though the popularity of the design would almost guarantee it (“It would be nice,” he says, “but it’s not that big of a deal”). Thus, public art as common medium, free-flowing between members of a culture. Lawrence Lessig game proper. I’m in.

HeightFiveSeven cannot support, however, passively dipping your foot into the shallow end of the pool when there’s a fucking game of Marco Polo happening in the pool right in front of you. Also, it’s your pool. And you’re just sitting there, watching.
(there’s a metaphor in there somewhere; lemme tinker with it a little more and get back to you).

I’ll back up. Alkhateeb is critical of President Dreamboat, as he thinks his performance so far has been underwhelming: “We don’t have to ‘hero-worship’ the guy,” he says. Sigh. Heeeere we go. That’s nothing this blogger hasn’t heard right-wing jerkfaces say a hundred times before; what can you do. But Alkhateeb goes on to say that he’s a Kucinich supporter.
(That’s the guy from Ohio who never stood a chance of becoming President because he was too much, um, like a Socialist. My mother the superleftist luuuuuhves Obama but still has not recovered from Kucinich’s defeat.)

So. Obama is too liberal, the poster tells you. Just look at the thing; blind man can see it, like James Brown always said. Even DJ Diabetic himself took a break from protecting his pristine brick from pesky graff writers to describe how succinct and clear the message conveyed in the “socialism” posters is (Obama is too liberal). It’s a message that’s pedestrian and lame and built upon falsehoods about death panels, but goddammit if it’s not a finely-distilled and clear message and that, no matter what the message, is the most important part of having a super tight street art game.

And Firas Alkhateeb is busy being 20, attending classes, going to Stereogum and checking Facebook 4 or 5 times a day, doing everything he should as a collegiate guy. And all the while the image he created is being co-opted to provide some striking, memorable as all hell, and visually persuasive material for the guys on the other team. Therein lies my concern. The situation’s like somebody boosting the image of my body up at the top of this page, adding “GIRLS SHOULDN’T LISTEN TO STEVIE WONDER” on the bottom, making it into a paste-up all over the metropolis, and me not really minding so much that my image is being used for the campaign against girls listening to Stevie Wonder. And then me reiterating my belief that girls don’t listen to enough Stevie Wonder in my interview with the LA Times.
(Please smack me in the mouth if I act like this; thanks in advance)

Firas can certainly be a 20-year-old in college who wants to sit this one out. I get it. We all have self-determination. He didn’t slap “socialism” under the Joker’s chin and didn’t ask to join the discourse; I get that too. I’m an understanding soul. But he’s still THIS GUY and you know it. There’s no fire on his part, no anger, no showing and no proving. You’re allegedly so Kucinich, Firas. Lemme see. Simon says, according to Monch, gettthefuckup.

I can’t say it as well as 1994 can say it, and I damn sure can’t say it as well as representatives from the state of Georgia can say it. So even though this song lyrically pleads for you to stop fuckin around and stop smoking so much goddamn weed and for you to get your head right, in keeping with the theme of this post I have co-opted the art of another party for the purpose of spreading my own message:

FIRAS. STOP LETTING THEM MURDER YOU ON YOUR OWN SHIT. Love, Logan.