Hips,
word etymology,
pics of myself stuntin with round black pieces of vinyl,
and ’94—

that’s what I bring to the table, you guys. 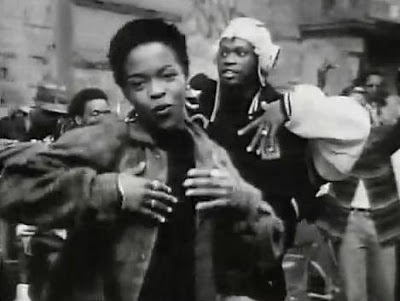 In early ’94 I was still getting over Zappa’s death and then this wondrous lady creature from South Orange swooped in and provided some respite. I felt blunted on reality and I liked it and didn’t want it to stop. The next day I woke up and realized that the greatest and most enviable 1-2 punch of superpowers is either:

It was all about to change a couple months later (only I had no idea at the time), when this sleepy-eyed dude from Queens would become the new air I breathe with his ability to monkey flip ’em. But right then, Lauryn was the one. Years pass, the trajectory of my musical life continues with highs and lows (mostly highs), and now I am the only one at Skinny Bored White Girl Gap who thinks of Lauryn when the term “lady rapper” comes to mind. So sad.
All the others love this Amanda Blank calamity, and it makes me cry into my pillow in apt. 302. Oh ladies, you’re too trife for words! This is the reason I hang out with boys!
(But also, ’cause sexual tension fuels me.)

All I’ve needed since like Tuesday has been ice cream, a pony, a Drake-less post on Nah Right, Erin Andrews to stop it, Eminem to stop it, the first 20 seconds of “Uptown Top Ranking,” and the version of “Vocab” below: Lauryn cheerfully proclaiming, “I feel kind of melancholy, people think they really know me/I keep a wrap about me while I’m driving daddy’s Audi,” the BDP-ish-ness of her verse, and the key change just after the 1-minute mark. And sweet Jesus!/OMG!/holy hell, the pretty guitar-picking ways of Wyclef on this–it begged and pleaded to be posted on here, a lovely sunny Friday on HeightFiveSeven. I liked his verse better where he informed us that he’s a Libra y’all, but I can appreciate him describing his fan-dom and telling us that back in the days/he used to listen to Kool G Rap.
(Me too, Clef! Even though, um, not really. In ’89 I was focused on my Crayola 64s and coloring book on the living room floor while Sweet Baby James bathed my little-girl ears in earnest male sensitivity).

And this feels funny to write/say, but I’ll give it a shot:

Gibberish sounds so good when it’s floating on a cadence like his.

(I tried to make this post tight n’ right, focused as hell, and all about “Vocab” alone, and I thought I’d save “Fu-Gee-La” for another day, but I just couldn’t stop myself. You see, attention please, I am such a girl because all I can think about is the fourth protagonist in the visual story below: Lauryn’s outfit, the boots and cream-colored dress. Add in that We used to be number 10! intro, and I DARE you to try and stop me from copying that embed code.

She cried when Cochise died, battled goons til high noon, saw right through your bluff, and went a little bonkers right around late ’07, but that’s bound to happen when you carry the grandchildren of Robert Nesta inside your earthly body. Anyway, we all remember this one; it’s not so obscure, but I always liked that sing-song-y She loved me like no other before…ay. And I wanted to post the Ramsey Lewis break.
Oh and here’s my latest great idea: let’s all eulogize Ruff House Records. Aw.)

2 thoughts on “I sit 90 degrees underneath palm trees.”