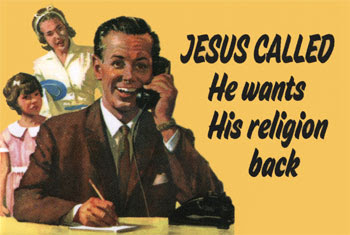 Jesus monsters are more likely to support torture than heathens such as myself.
No. fucking. way.
I’ve always found evangelicals to be a compassionate and intelligent lot who would not endorse such tactics! Somebody hold me, cuz I’m about to fall over from surprise.

“The more often Americans go to church, the more likely they are to support the torture of suspected terrorists, according to a new survey.

More than half of people who attend services at least once a week — 54 percent — said the use of torture against suspected terrorists is “often” or “sometimes” justified. Only 42 percent of people who “seldom or never” go to services agreed, according to the analysis released Wednesday by the Pew Forum on Religion & Public Life.

White evangelical Protestants were the religious group most likely to say torture is often or sometimes justified — more than six in 10 supported it. People unaffiliated with any religious organization were least likely to back it. Only four in 10 of them did.

One thought on “Jesus thinks waterboarding is fine”