Everyone loves ’em. Mine, of course, are stunning.

Another one going into the “No Fucking Way” file. 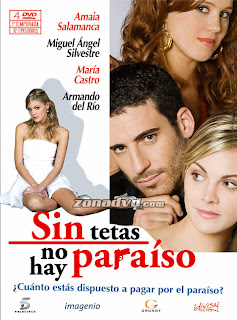 “NBC has bought the rights to the muy successful Colombian telenovela “Sin tetas no hay paraiso” (“Without Breasts There is No Paradise”) and is developing it as a likely primetime project. Simulatenously, NBC sister net Telemundo will produce a Spanish-language version of the format with a different cast and script.

“Sin tetas,” from Colombia’s Canal Caracol, focused on a young woman determined to get bigger breasts in order to escape poverty. She ends up working as a prostitute, getting involved with drug dealer in the process. Sudser is based on the novel of the same name by Gustavo Bolivar.

“These synergistic productions represent a giant leap forward for the networks of NBC Universal,” producer Ben Silverman said. “I scour the world for the best ideas and for the game-changing hit shows and ‘Sin Tetas’ is one of those shows. We have a tremendous opportunity to achieve cross-promotional efforts on behalf of both of these telenovelas as we reach out to diversify our audiences.”“

“Excuse me, miss–are you an actress?”

I am shocked, shocked I tell you, that this dude Ben wanted to produce a show about a nubile Latina in search of larger breasts! I’m sorry, but this picture tells me a story:

Ben = every creepy “producer” dude I encounter whenever I cross over onto the hideous Westside (sorry, he just gives off a Santa Monica vibe…never goes to the beach, just lives by the beach cuz the ladies like it, drivin around in his 7-series, bumpin Jay-Z like he’s down). If you are a reasonably attractive young lady in the greater metro LA area, you have encountered at least 12 Bens thus far. Sorry if you’re a nice dude in real life, Ben; I calls ’em like I sees ’em.

One thought on “Breasts = Paradise”